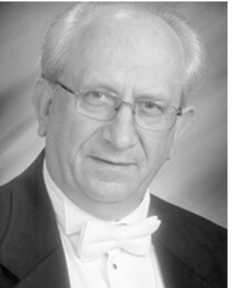 
Maestro Volodymyr Shesiuk is currently celebrating his 26th year as Music Director and Conductor of the Livonia Symphony Orchestra.  He began playing violin at age seven and at 14 was accepted as a student at the Lviv Music College in the Ukraine.  His professional career began in 1969 as concertmaster at the Lviv Academic Opera and Ballet Theater after completing studies in violin. Maestro graduated twice from the Lviv State Conservatory: first five years in violin performance, and another five years in operatic and symphony conducting.
Shesiuk was chosen for an internship program in 1983 as Conductor-in-Residence of the Bolshoi Theater in Moscow, Russia.  There he conducted the operas The Barber of Seville, Madame Butterfly, Carmen and Eugene Onegin. Then in 1985, the Kyrgyzstan government appointed him Chief Conductor of the National Opera and Ballet Theater.  He conducted over 100 performances and concerts per year with various orchestras and theaters throughout the Soviet Union.
Maestro Shesiuk received the Laureate of the Maldybaev Award of Kyrgyzstan for the premiere performances of the opera Sepil by S. Osmonov.  Several of his performances were made into operatic films by Belorus and Kyrgyzstan television.  Shesiuk was awarded special recognition by the Azerbaijan Government for a performance in Detroit’s Orchestra Hall with famous Azerbaijan singers.  During his 20th Anniversary with the LSO, Maestro Shesiuk received a Recognition Award from the Ukrainian Minister of Culture.
Besides conducting more than 100 titles of opera, ballet and operatic scores, he also has included in his repertoire many works of Western and Eastern European music as well as compositions by American composers.

Advertise your business on the homepage of the Livonia Symphony website.  To become a website sponsor and for additional information, please send an e-mail to webmaster@livoniasymphony.org.